“The plot of the Odyssey is not long in the telling. A man has been away from home for many years. Poseidon is always on the watch for him; he is all alone. As for the situation at home, his goods are being laid waste by the Suitors, who plot against his son. After a storm-tossed journey, he returns home, where he reveals himself, destroys his enemies, and is saved.” (Aristotle, Poetics)

81-year-old retired research scientist, Jay Mendelsohn asks his son Daniel if he can sign up for his undergraduate seminar on The Odyssey. Daniel, who teaches at Bard College, has always had a complicated relationship with his father. But he agrees, thinking that he knows the reasons why (“for him, the more arduous something was to achieve or to appreciate, the more worthwhile it was”). But, through the course of this spring semester, studying this epic about “long journeys and long marriages and what it means to yearn for home”, in a classroom full of college freshman, a father and son finally come to an understanding about each other.

In late 2017, I devoured Emily Wilson’s fresh and insightful translation of The Odyssey; all 12,110 lines of it. It was my first time reading the epic in verse. In summer 2018, I read Madeline Miller’s Circe, enjoying the additional depth afforded by my understanding of the larger picture surrounding the story and the characters; this feeling of being part of a collective and ongoing story tradition.

Daniel Mendelsohn’s An Odyssey: A Father, a Son, and an Epic references this feeling of belonging to the vast lineage of “study and scholarship” snaking back all the way into ancient times; a bloodline that is connected to everyone who has ever read or studied that text, adding to the knowledge, understanding and insight. He talks about what it means to study the classics, the driving need felt by him and others to dissect words penned long ago; and their continued relevance and preoccupation with questions that we also share, so many decades hence.

Italo Calvino, when he writes about why one should study the classics, calls them books that have never finished saying what they have to say. Daniel Mendelsohn agrees. He goes one step further in wanting to share with his students, and his father, exactly what it is that he loves in them – the moments, as well as the revelations that have continued to give him so much joy.

“The best teacher is the one who wants you to find meaning in the things that have given him pleasure, too, so that the appreciation of their beauty will outlive him. In this way—because it arises from an acceptance of the inevitability of death—good teaching is like good parenting.”

But, what if someone doesn’t agree with you, or simply doesn’t like the classics? Calvino, in the same essay, talks about the “spark”-

“If the spark doesn’t come, that’s a pity; but we do not read the classics out of duty or respect, but only out of love.”

Jay Mendelsohn is a complicated man and he has a lot of opinions about Odysseus, in particular, that are sharply contradictory to his son’s. He finds him whiny, incompetent, aided by the gods at every turn; in fact, Jay doesn’t think he’s a hero at all. And he makes his voice heard, despite promising Daniel that he would be mostly quiet during the seminar. What’s even worse for his son is the fact that many of his students seem to share Jay’s opinions.

Add to that the already estranged Mendelsohn father-son connection, and their journey with all its ups and downs and revelations is as compelling as the discussion of the actual epic with its own father-son threads (Odysseus-Telemachus, Odysseus-Laertes, in particular).

The book is divided into sections, each prefaced by a Greek term and the months of the semester in which the memories in them took place – Proem (Invocation), Telemachy (Education, January-February 2011), Apologoi (Adventures, March-June), Nostos (Homecoming, April), Anagnorisis (Recognition, May), Sema (The Sign, April 6, 2012). This is a good way to break up the story, plunging into flashbacks about Jay’s life and Daniel’s, and allows for the kind of “ring composition” (circular storytelling) that would make any Greek scholar proud.

At the end of the semester, Daniel rues how he “had never found a way to persuade [his father] of the beauty and usefulness of this great work, whose hero he still didn’t find very heroic, whose structural ingenuities left him cold, whose famously fascinating protagonist had failed to fascinate him.” But, he is in for a surprise.

In one of my favourite sections, Daniel, prompted by a former professor and friend, takes Jay on an Odyssey cruise, a ten-day affair (one for each year that Odysseus spent getting home) that stops at each point of interest in our hero’s journey. It is during this trip that Daniel realises that maybe Jay is himself “polytropos”, just like the hero he so detests in many ways. The man of many turns who shows a very different side of himself to their fellow cruise passengers, as well as to Daniel (the part where they are at the location of what is believed to be Calypso’s cave is particularly poignant). The man who starts to refrain “The poem feels more real [than the ruins]” each evening as everyone talks about what they had seen earlier that day; quickly glancing at his son, knowing how much the thought would please him.

The book includes plenty of fascinating discussions about the epic itself (including the meaning and root of many of the important words); about whether you can ever really know someone; about whether you can possess one singular defining “identity”; about what a strong, successful marriage looks like; about destiny and the gods, about choice; about what it means to long for home yet not recognise it when you do finally arrive. 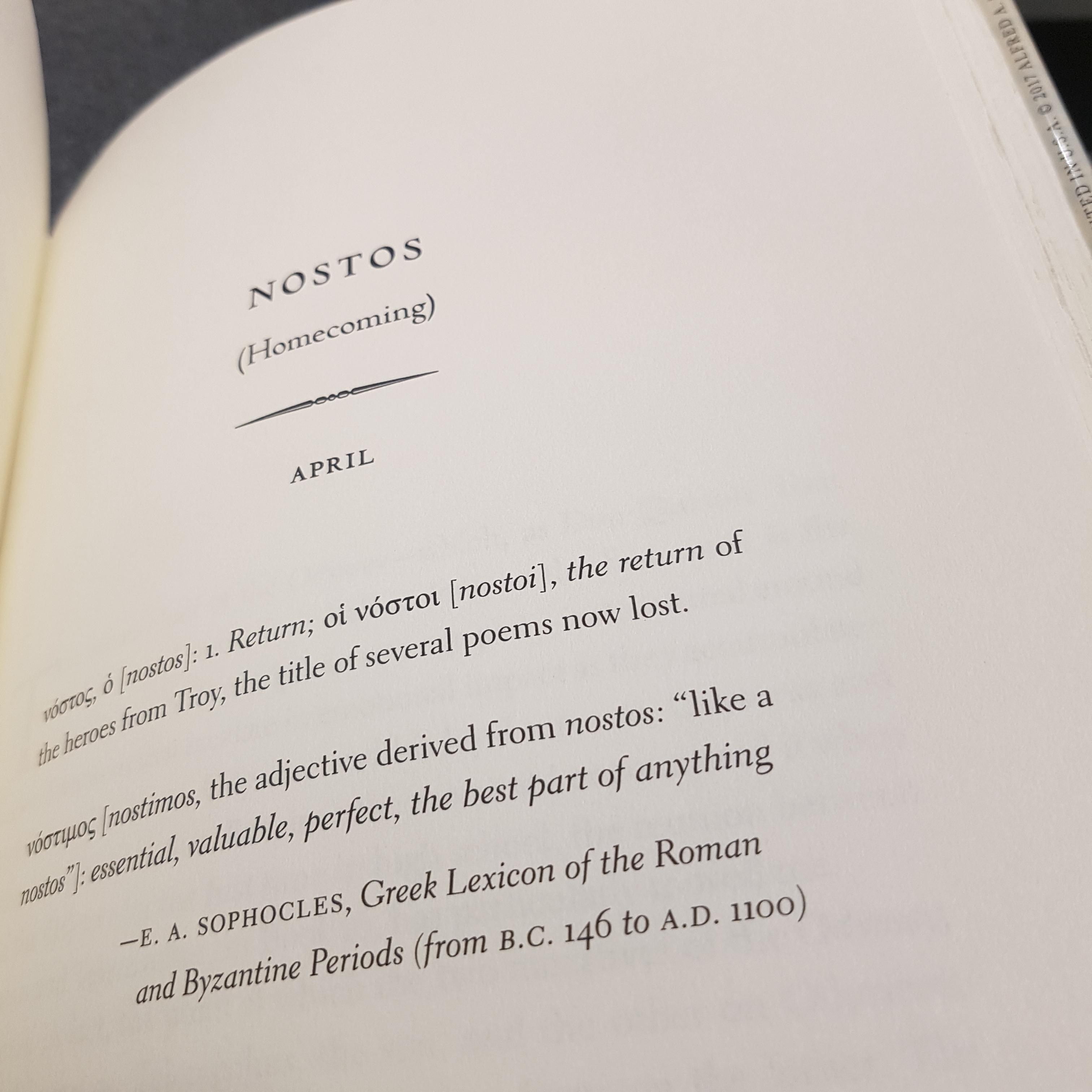 Some digressions work, others don’t. Some comparisons naturally fit, others feel forced. But they all come together to make a touching, compelling memoir about fathers and sons – about how stories shared across time and place allow people to feel connected, allow them to mend relationships even when they thought it was too late, allow them to say goodbye to their father and pay homage to their memory against the backdrop of having finally truly gotten to know them.

An Odyssey offers its own emotional final scene to match the tearful reconciliation present in the actual epic, the moment an aged Laertes is reunited with the son he long gave up any hope of seeing. Here, it’s a farewell, but it’s no less poignant for the journey we’ve all been on with them over the course of the semester. This is the kind of work you revisit, already knowing that each experience will be different even as the person reading them is now different. I look forward to the insights that I know are waiting for me, years down the line.